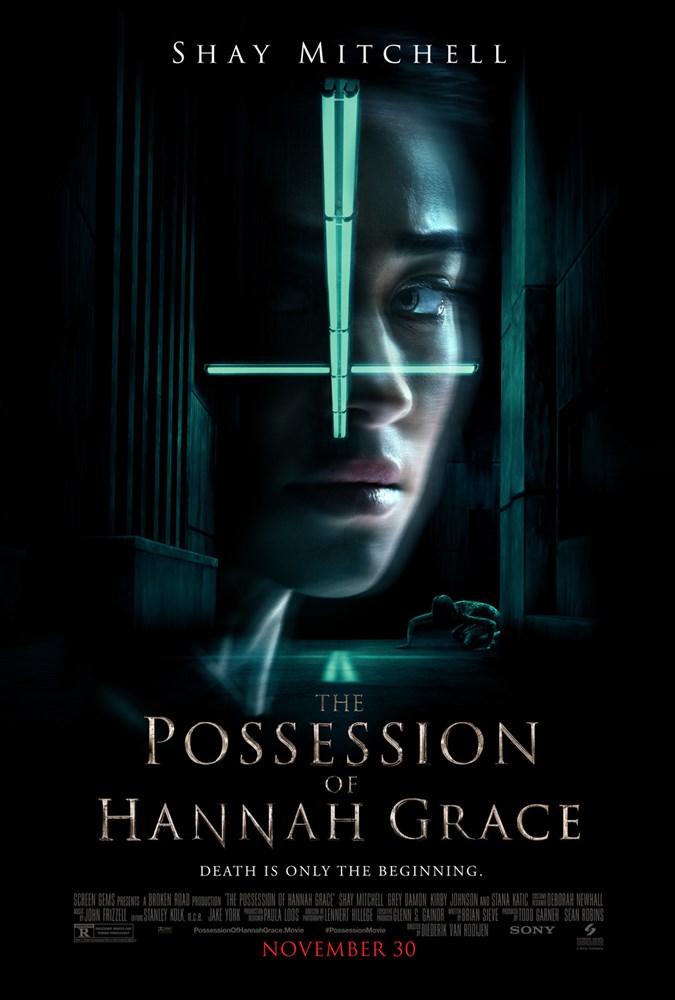 Stop me if you heard this one before. ‘I love horror… when
I watch The Walking Dead.’ How about,
‘The scariest movie in a decade or a generation!’ We could also go with a
direct quote from Twitter, Instagram, Facebook or a horror figure who gives their stamp
of approval. This stamp is more of a scarlet letter for The
Possession of Hannah Grace as it is marked with the promotional hype that comes again from
a mainstream studio selling this film to the masses as the next scariest thing
ever! It is no surprise, that this film ended up this way. Released
by Sony Pictures and Screen Gems last November, this fil is the latest in an assembly line of the same old possession type genre storytelling which misses the mark on many fronts.

The Possession of Hannah Grace, tells
the story of a young woman and former Boston police officer named Megan (Shay
Mitchell). Piecing together her backstory and trauma as a cop throughout the film, you come to find
out that the trauma came with in the line of duty and was so traumatic, that damaged her incredibly. Becoming a recluse and cutting off many of those that she cared for through drinking, drugs,
and her inner demons, Megan has decided to try again and take a job as part of
the graveyard shift in a hospital morgue. Throwing up warning bells with Megan's former live in boyfriend and cop Andrew (Grey Damon) and her friend Lisa (Stana Katic),
Megan takes on the job that is almost in total isolation except for a couple of offbeat
security guards, a body delivery driver, cadavers, and a father/daughter dealing with a
demon who has possessed the daughter named Hannah (Kirby Johnson) and her
father who has to kill his Hannah (and the demon within) named Grainger (Louis Herthum).

Now let me go back to the beginning of this film's narrative of how we meet Hannah. We open the film in a bedroom with two priests, Hannah, and her father fighting the demon inside her. Through telekinesis, the possessed Hannah kills a priest as he is trying to
exorcise the demon, assaults her father, and the assisting
priest. Okay, we are all caught up to where Megan is adjusting to her new position and
Hannah’s body being dropped off at the morgue to do an autopsy one night after it was recovered from a vicious assault by her father attempting to end her. As Megan and
the driver off load the body, Daddy sneaks in, to finish the job. Once Hannah’s
body is laid out on the table, the full haunted house mode kicks in with failing electronics, sound
effects, dark figures, long halls, and psychological torment from Megan’s past
and the evil now within the walls in a nutshell. It leads to many people dying during Hannah's stay. We watch Megan growing
stronger as a survivor and we watch a narrative that has so much potential in the first half take a turn into a higher quality Lifetime style horror film in the second half. In the end, The Possession of Hannah Grace is pretty
much what dedicated genre fans expect from major studio releases and family friendly horror fans will
enjoy as a bridge to more horror storytelling hopefully.

Don’t get me wrong, I don’t hate this film. In fact, I
enjoyed it more the second time I watched it, before I wrote this review. For anyone who knows me, I am turned off by most
films that are hyped to the high heaven. Most fall short of expectation and
from seeing this trailer months ago, I stayed away
until it hit DVD. The Possession of
Hannah Grace is written by the man who brought us the sequels to Boogeyman
and CW/MTV TV horror in Brian Sieve. The film is directed
by Dutch filmmaker Diederik Van Rooijen. This is Van Rooijen's, first entry into the
horror genre according to IMDB. The Possession of Hannah
Grace is edited by two editors (bad sign) who could not be more different on paper
then Jake York, who edited the mainstream releases of U.S. version of Martyrs (2015) and the disaster known as Slender
Man (2018). The other co-editing credit goes to Van Rooijen’s editor on both features and television in Stanley Kolk.
What could possibly go wrong? Well, you have a Dutch director telling the story of a millennial
horror screenwriter with two different editors bringing it together.
Sounds like the three different films that were made here, all were doomed.

There are elements that work though. The film has some very human performances that are surface level. Mitchell’s performance
as Megan definitely has layers showing her trauma that has been crippling to
her life. The problem is, that her trauma does not balance with the horror. It feels like a
lot should be going with Megan trauma but never fully develops and is a subplot that wants to be the real focus. The same can be said for
Hannah and her father. We are introduced to this really horrifying and
disturbing series of events that no parent should ever have to go through against the canvas of exorcism light, that no young girl should face. By the way, why is it only young women who become possessed? The opening works showing in very 'Hollywood terms' what the conflict will be going
forward. The problem is, that the father never fully develops his conflict with Hannah. We have a full three month window between the opening and the real time events with no idea what he has done or has gone through. So many questions to ask and so many answers not addressed or left on the cutting room floor.

The father is so transformed but like most of the
characters, we have breadcrumbs on why? Other questions like, How did Hannah become possessed? Why
was she chosen? What details are we missing after Hannah’s father finally tells
the security officers and Megan to burn her because she will keep coming back?
It is a puzzle missing so many crucial pieces. The rest of the characters, even Andrew, are thrown away, sub
characters set up to burn. Recently, with features like The Autopsy of Jane Doe, The Witch in the Window, and Girl on the Third Floor, we see
regeneration of evil entities done right. We see the protagonists rebuilding, restoring,
and reconstructing the vessels that bring the antagonist back to life. The Possession of Hannah Grace attempts
to do this, but fails because you don’t care about the characters being sacrificed
and you don’t know why Hannah is killing off most surrounding Megan other than it
heals her demon soul.

The film has some very cool CGI which does most of the work
for Hannah’s possessed form to roam and cause hell within the hospital morgue. Unlike The Exorcism of Emily Rose or Jane Doe, where the performance is so much more practical, it is majority CGI as the demon becomes stronger. The
opening sequence with Hannah’s possessed form being tied down to a bed is highlight
in many aspects with practical performance. The film does not feature much blood or gore which again in positioning for safety, a wide audience, and a big payday (nearly $15 million on a near $8 million production budget). The film succeeds
though with some really great technical work. The sound design is very
effective whether in the theater or watching at home. If nothing else, the post production gets it right in constructing a haunted
house inside the walls of the location. Elements of isolation, mental struggle, and addiction all are pillars to Megan’s fractured mental state through a majority of the film with the sound design, Foley, and edit highlighting her instability and adjustment. The score is adequate for the film, giving boosts here and there when needed.

The lighting may be my favorite element overall. It is such a successful device to reveal the horror and build tension. The motion
activated lights above in the location, the color schemes for the rooms, and the use of colored gels to
help convey the emotions all stand out. Van Rooijen brings on Lennert
Hillege to this film, there is defiantly a connection between the two. Hillege's framing and camera movement
embraces the shadows and creates a fear as we move with the POV of the camera. It feels tense and playful yet in such an effective execution. Unlike the editing,
there is only one DP which we are thankful for.

One of the most interesting things that caught me on this film, is the trend of foreign directors taking on American horror. Like the most recent incarnation
of The Strangers: Prey at Night, non-United
States filmmakers, put their fingerprint on more American genre stories. It's interesting to see the darkness through their eyes. Overall, I think The
Possession of Hannah Grace suffers from not knowing what kind of film it
is and how to balance the drama and horror with the empowering climax. The first half
of the film is very different than the second half for a number of reasons. I
think the editing most likely is at fault for this with scheduling and large studio
pressure to follow. It would have been interesting if we had some of these plot holes filled in with the backstory on Megan,
Hannah, her father, and/or the demon. We are missing key puzzle pieces that leave
too many questions as we watch and with an ending that is empowering for Megan but abrupt. Also, what happen after they found all the bodies around her? The rest of characters just fall to the waste side why Hannah moves on. It just does not work. The Possession of Hannah Grace could
have been so much more. The film overall is a victim of too many things with only dollar signs in the tunnel vision. In the end, I would leave this one
alone if you are dedicated fan of the genre but if you are just starting out,
take the time to check it out but don't expect more than haunted house, surface horror cinema.

The
Possession of Hannah Grace is out on VOD, Blu-Ray, and DVD right
now. Pick up a copy on Amazon today. 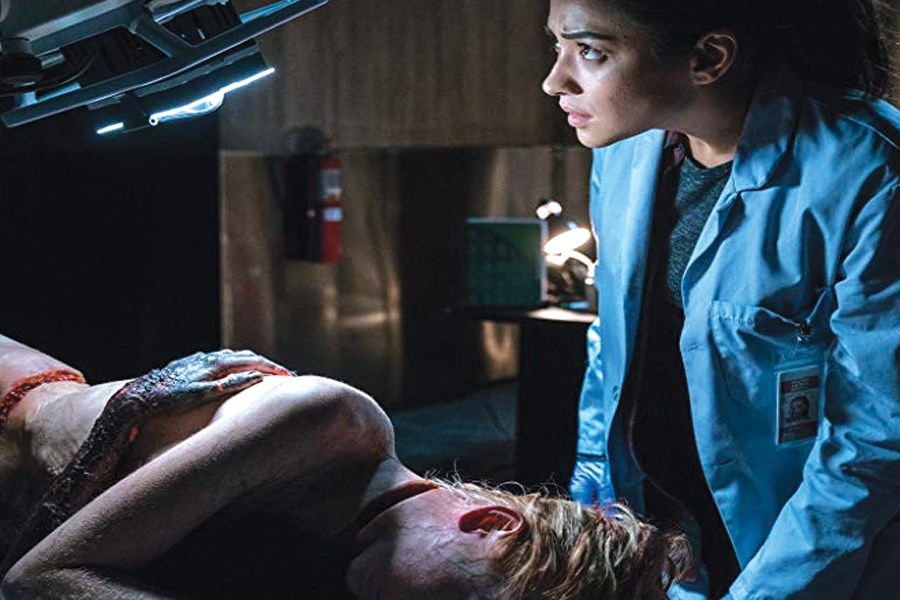