Details for the Virtual HorrorHound Weekend are rolling out!

Starting at 2pm on Friday, March 19th, fans of indie horror cinema – and horror in general – can login to the Virtual HorrorHound Weekend event, a three-day streaming film festival loaded with bonus celebrity interviews, filmmaker Q&As, new exclusive material, plus comedic and musical entertainment. Be sure to follow us on Twitter, Facebook, and/or Instagram for film and entertainment announcements, as they are revealed.

And for the third straight Virtual event ... this one is
FREE to HorrorHound Weekend Pass Holders!!!

That's right! Due to the continued postponements of live events, we wanted to make sure that our loyal customers were given access to these virtual events at NO CHARGE! So, for the third time, anyone who holds an unscanned ticket to a HorrorHound Weekend event – you will be able to use said-ticket code (don't worry, it will not void your ticket) to login Friday, March 19th, and enjoy three full days of streaming horror entertainment via live.horrorhound.com! Then, on September 10th, you can use said-ticket to join us in person at the Sharonville Convention Center (if you are unable to make the date - your ticket is good for up to three years at any upcoming HHW shows!!!!). Visit www.HorrorHoundWeekend.com for additional show dates through 2023.

ABOUT the Virtual HorrorHound Weekend:

The Virtual HorrorHound Film Festival will kick off with a night filled with new feature films and shorts that make up the Spring HorrorHound Film Festival. Programming will last past midnight, and include many surprises, including introductions by filmmakers, filmmaker panels and special looks back at past HorrorHound Weekend events. While the livestream is occurring, fans can also participate in our chat feature, and talk with one another while the movies are streaming – chat sessions in which the filmmakers will be participating in as well. Plus, we will have a live Viewing Party option, where attendees can participate in live video chats during the films' livestreams. On top of this, people who attend the Virtual Film Fest will have access to new HorrorHound merchandise – made available for the first time as part of this digital event. The festivities kick off Friday, March 19th, at 2pm – and will continue each night at the same time, through Sunday, March 21st. *Select convention merch: remaining stock may be offered later after the ‘Fest. All you must do to access this three-day Virtual Film Festival is either be an existing HorrorHound Weekend ticket holder – or purchase a ticket where you will receive an email with a password code. When the event weekend comes, on live.horrorhound.com, you will be will prompted to enter said code (for current passholders, just use the code located under your barcode found on your Ticket). Once the code is entered – you are set. The livestream will begin. Please note – this is a LIVE streaming film festival, which means there is no "pause" functionality. So, make sure you have your popcorn ready!  Enjoy the film fest!

If you are not a current HorrorHound Weekend pass holder and would like to participate in the Virtual HorrorHound Weekend event, just CLICK HERE to order your ticket today! In keeping with our convention history – we have also put together a VIP merchandise package, which includes: a NEW HorrorHound event tee ... a Soft enamel "Glow in the Dark" pin ... a limited edition exclusive badge & HorrorHound lanyard ... a fun new Sticker ... a physical copy of HorrorHound Magazine 15th anniversary special ... and as a BONUS, you will receive one MYSTERY signed celebrity 8x10 from the HorrorHound Archives*. It could be one of dozens of possible celebrities (see details below). Definitely worth the price! Oh yeah – this package will also include access to the Virtual event, March 19-21st! To order your VIP package just VISIT HERE! (Standard Virtual Weekend ticket is $10; while the VIP Merchandise Bundle is $70.) 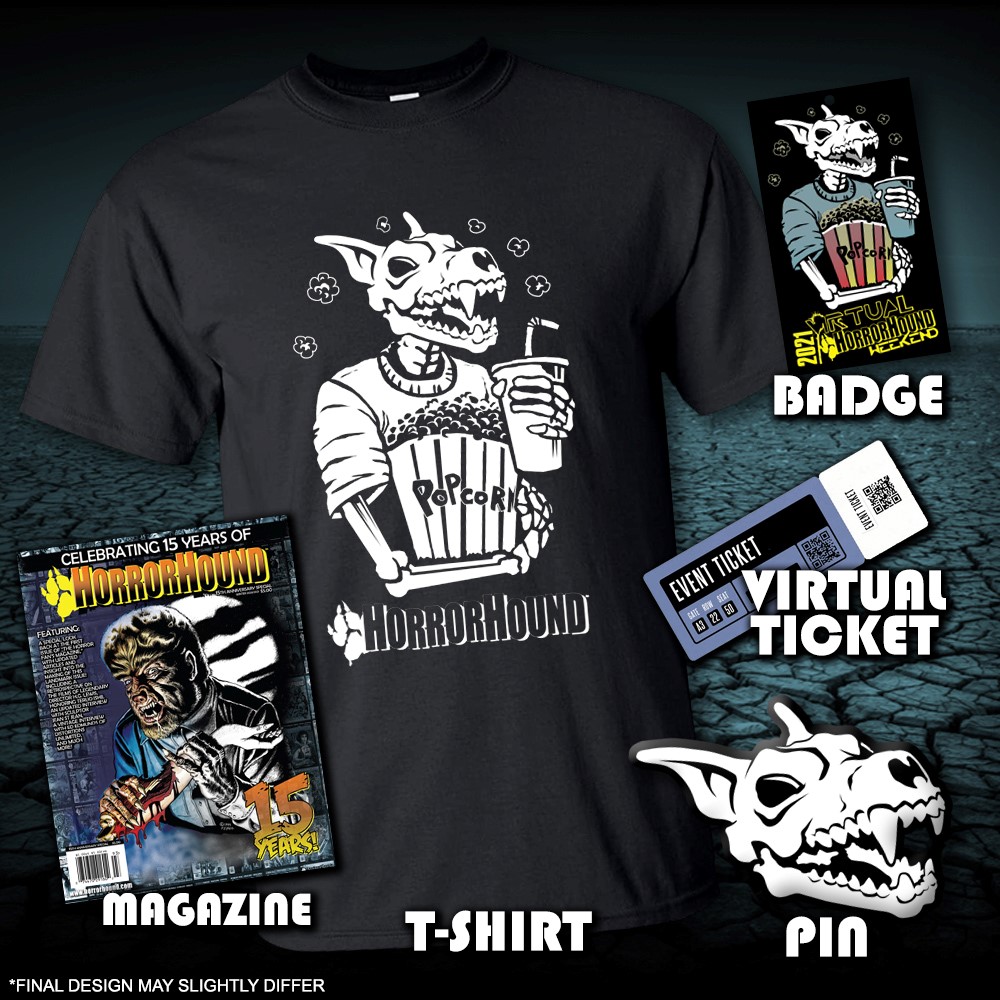