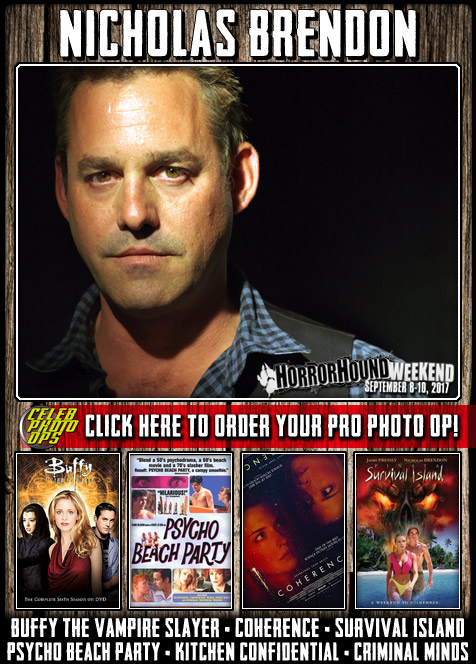 We are excited to reveal yet another great new guest scheduled to appear at HorrorHound Weekend: Indianapolis – September 8-10th – at the Marriott Conference Center @ Indy Marriott East ... NICHOLAS BRENDON!

Nicholas Brendon​ is an American actor and writer. Nicholas got his big break as an actor when he landed the role of Xander Harris on the hugely successful TV series Buffy the Vampire Slayer (1997-2003). The series ran from 1997 until 2003, garnering a huge cult following as well as a large fan base for Brendon.

Nicholas's first major role in a feature film came with the Charles Busch satire Psycho Beach Party​ (2000). Brendon has also starred in the ABC Family Channel original movie Celeste in the City​ (2004). The following year, he returned to Fox as part of the cast of Kitchen Confidential​, based on the book by chef Anthony Bourdain. In 2006, he voiced Huntsboy #89 for season 2 of the animated series American Dragon: Jake Long​. That same year, he reunited with his former Buffy the Vampire Slayer co-star Charisma Carpenter​ in the ABC Family TV movie Relative Chaos​.

In 2007, Brendon began appearing on the popular TV series Criminal Minds​​ in the recurring role of FBI technical analyst Kevin Lynch. He appeared in episodes in each season through the tenth season. In September 2010, he premiered his web comic 'Very Bad Koalas', co-created with animation director/producer Steve Loter The comic follows the journey of two sheltered and innocent koalas experiencing a variety of people and places while on the run from the law in a 1958 Cadillac Eldorado. In October 2010, Brendon began a four-episode arc on ABC's Private Practice playing Lee McHenry, a mentally disturbed man who assaults Charlotte King.

In 2014, he played a pivotal role in Carter Covington's MTV series Faking It​ as Jackson Lee, a mentor to Gregg Sulkin​'s character Liam Booker. That same year, Brendon was part of a summit for writers of the 'Buffy the Vampire Slayer' comic books from Dark Horse which included Joss Whedon, Jane Espenson, Drew Greenberg, Andrew Chambliss and the then-incoming Buffy writer Christos Gage. He is credited with co-writing several issues of the show's canonical comic book series.

Most recently, Brendon completed filming The Nanny​, Redwood​, and Dark/Web. This booking marks Brendon's first-ever HorrorHound Weekend appearance – where he will be signing alongside fellow-Buffy alumni James Marsters (Spike) and Juliet Landau (Drusilla) – celebrating the 20th anniversary of Buffy the Vampire Slayer!

Tickets for HorrorHound Weekend are NOW AVAILABLE at early bird discount pricing. Look for prices to increase in just a few weeks. But before that happens – save some cash – visit www.horrorhoundweekend.com and secure your passes today! Share - and tell your friends!