The Conjuring: The Devil Made Me Do It Opening First
Thoughts

The Conjuring franchise has become one of the most
successful in horror history. This is in no small amount due to The Warrens as
represented by Patrick Wilson and Vera Farmiga. The relationship between these
two and their ongoing battle against demons and the dark in the series has
created a worldwide sensation and shown horror films can give other
blockbusters a run for the almighty box office. The two actors have a great chemistry,
and it comes across on screen, with Lorraine fighting for the life of her
husband and Ed willing to sacrifice everything for his wife. The heroes win and
all is right with the world.

That’s what makes The Conjuring: The Devil Made Me Do It an
even bigger deal when it comes to this universe created by James Wan and
company. This entry details one of the most tragic incidents in the Warren’s
case history, a time when things didn’t end neatly, and the world was once
again debating the existence of the devil.

The Devil Made Me Do It follows the case of Arne Johnson,
his possession as well as that of David Glatzel and the subsequent murder and
trial known as The Devil Made Me Do It case. It was the first time in US
history a murder case had a defense of demonic possession to support the not
guilty plea and the Warrens were there to support Johnson who was being charged
with the murder of his landlord, Alan Bono.

The claim was that during the exorcism of David Glatzel,
Johnson goaded the demonic entity that was tormenting the boy to take him and
so it did. What followed was Arne Johnson and Debbie Glatzel (David’s sister
and Arne’s fiancé) living through a bizarre nightmare of Arne having the same
sort of fits and visions that David had suffered, eventually culminating in the
stabbing of Alan Bono by a snarling Arne.

It was a trial the likes of which never seen and a story
that inspired books, tv specials, and films with the latest Conjuring giving a
terrifying look at what may have happened.

I was lucky enough to get to see the first 11 minutes of the
feature and speak with director Michael Chaves about the movie. The beginning
of the movie starts off running, taking place the night of David Glatzel’s
exorcism. Chaves includes some fantastic homages within this scene which has
some truly brutal moments helped along by the fact that the contortions that
Julian Hilliard’s David goes through are actually real and performed by a young
girl who has Julian’s face superimposed on hers digitally.

I don’t want to spoil the beginning for anyone but it’s a
fantastic and creepy scene that changes everything for the Warren’s in more
ways than one.

We were also treated to an even more chilling piece of lore
from the Warren’s history and that was the actual audio from the exorcism of
David Glatzel. It’s truly terrifying and within it you can hear his mother
pleading for the soul of her son. You hear the voice of the demon and it will
send chills up your spine. 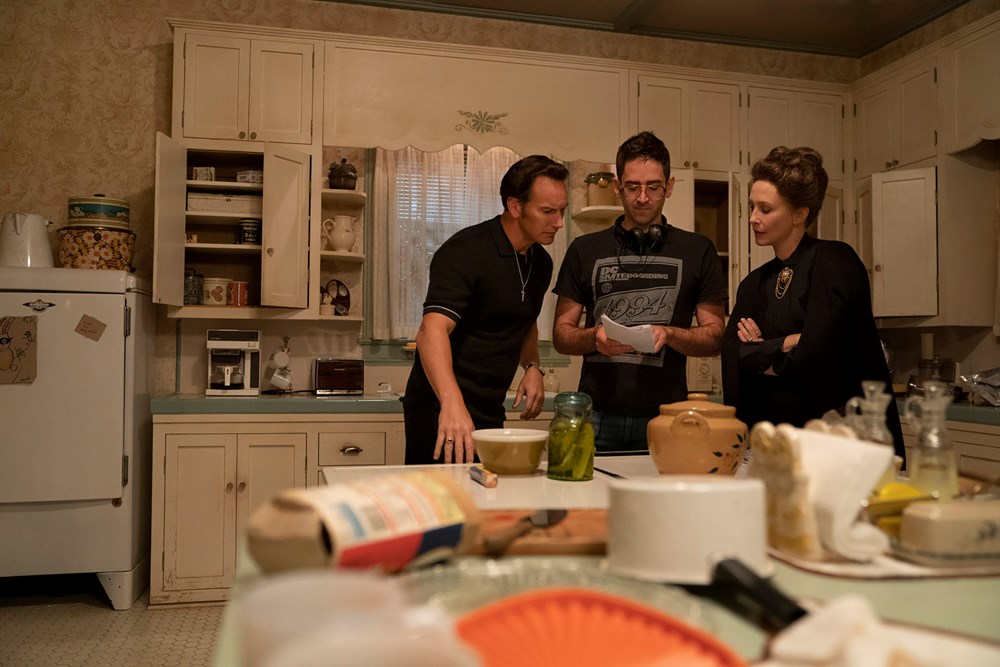 I wanted to ask Michael Chaves about creating the latest entry
in the franchise and how Ed and Lorraine in these films are just as important
and as popular as the monsters and devils they fight.

HH: It's kind of great that in this these films, Ed and Lorraine are the heroes
and they become more popular in a way than the demons or the monsters. They're
the heroes. You don't really get that in horror films that often where the
heroes are the draw. It's usually your Freddy's and your Jason's or your Reagan
McNeill's. Can you talk about having them kind of being the new Van Helsing's
in a way of cinema and owning this franchise and being the heart of it?

MC: Yeah, that's the reason that I'm such a fan of it and I
think so many people come back to it. I think when we've screened this for
people, one of the big responses is that they love how the Warrens take center
stage.

And in my thinking is like, well, they've always taken center stage. They're
the heroes of these movies. And but I think that, you know, what they're
responding to is this is the most kind of Warren centric story. This really
kind of focuses on their story. And even though it is the story of Arnie Johnson,
you know, they really kind of take center stage in this. Ed has a heart attack
in the beginning of this movie.

That's something that happens in real life. And it definitely has this kind of
impact on the rest of the film. But, yeah, I think it's just, they're so
lovable and they're so wholesome. And I think that it allows you to get darker
because you have this kind of emotional anchor of the Warrens. You just love
these guys and that you'll go on any journey with them.

The Conjuring: The Devil Made Me Do It will be on HBO Max
and in theaters on June 4th.