The Conjuring 3: The Devil Made Me Do It Light Vs Dark

One of the biggest horror movie franchises in recent years, The Conjuring has made its own universe full of full on horror.  What makes these films stand out is that they are based on the real lives of Ed and Lorraine Warren, paranormal investigators who spent years chronicling their run ins with the forces of darkness.

This latest film stands out as it involves the very real murder of Alan Bono by Arne Johnson.  It would be the first case in US history where the defense used demonic possession as the reason for the crime.  With that sort of weight the film had a responsibility that the filmmakers took very seriously.

Michael Chaves:  I spoke with James, I spoke with Peter in the studio. And I think that, you know, for any franchise to seem fresh or be fresh, there needs to be invention and reinvention. And we wanted to to tell a story, but in a way that we haven't seen before. This is in a lot of ways more a supernatural thriller

We're taking the Warrens on the road. And you said it's one of their darkest cases. You know, these are always marketed as the darkest Conjuring film. And I think in so many ways, this really is when you really look at the case, it's one of the most controversial cases. And I think the whole thing is just so fascinating. 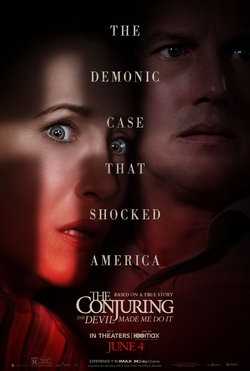 The Conjuring 3:  The Devil Made Me Do It is really about light vs dark and good vs evil in the purist form.  This film sees the Warrens more front and center, with the action taking place in "the real world" and not so much a haunted house or one location.  It opens up the franchise and the story of the couple whose love for one another is really the center and heart of the films.  We see Ed and Lorraine, as played by the perfectly cast Patrick Wilson and Vera Framiga, more at risk and also more reliant upon each other.

Patrick Wilson:  I always have to go back to the first film in those conversations, James, that you and I had early on about how, you know, the way that the structure of these films is going to be built with following these different cases and these different families, but really centered around the Warrens and what we're going to go through, right or not. Right. But they become the through line between all these films.

And that's something that that one that sets us apart from other horror franchises is that you're following the good guys throughout instead of the villain. But to the fact that, you know, I think James the conversations that we had early on in the first one where you knew, you'd get to the scare, but you knew you had to build the character in the relationships, whether it was a guy and a guy, a guy and a girl, whatever it was going to be.

So we already were leaning into character and relationship and love and partnership in these movies. And when you have that, when you know you can center around love and it's our version of Ed and Lorraine. We don't know how they were behind closed doors. It's our version of what Ed and Lorraine. And I think in some way it frees you up to go as dark as you want and the other aspects because you really get to balance it out, because I would say that this film probably is some of the darkest moments of any in the universe.

Michael Chaves will have you looking for nods to other classic horror films throughout, some more obvious than others.  I asked about this as well as the fact that within the film there's a sense of going deeper into darkness throughout the movie that is unrelenting.

HH:  I noticed not only an Exorcist homage here, but I caught a lot of The Shining, too. I love the style and how you brought this together. But one standout for me was the image of descending either down stairs or into darkness itself. Can you talk about the meaning of that and finding the style you wanted to bring together?

Michael Chaves:  Yeah, in terms of the descent, I guess there was. I wanted to send the Warrens to hell, and I love the idea that they would this would be there would be this kind of feeling of descent through the through the movie and even the idea of like Orpheus and the story of as Ed goes to save Lorraine at the end without giving anything away, the idea, the story of Orpheus and just like the idea that they are, you have someone descending into the underworld to get their love back.

I just thought that that was really, really fun. And just like this continual descent through the movie. So, yeah, that's one of the things. And yeah, I think that the Conjuring movies are from the very beginning they are love letters to the genre and I see so much. The first Conjuring stands on its own is an amazing horror movie. But then you can see it's inspirations, you can see The Changeling and you can see other movies that are kind of rooted.

And I think that, you know, I kind of shamelessly wanted to throw out, like, nods to The Exorcist. And there's a couple of Psycho nods in there as well. And I think it's important, just like you'd have Easter eggs within a franchise and nods to other movies. I think it's also just a conversation with the genre itself, because I think The Conjuring has so much become, honestly, the definitive horror franchise.

The Conjuring 3: The Devil Made Me Do It hits HBO Max and Theaters June 4th.