No Man of God:  Review/Interview

No Man of God isn’t a flashy film.  It doesn’t have overt scenes of violence and
gore.  It’s not supernatural at all.  The thing that makes the movie terrifying is
the realness of it and how it shows us, very clearly, how Ted Bundy could do
what he did for as long as he did it.

Elijah Wood and Luke Kirby are fascinating as Bill Hagmaier and
Ted Bundy.  The movie is more of a play
focused on these two as they discuss other killers and themselves.  As the interaction between the two goes along
we see Bundy getting into Hagmaier’s head and vice versa.

The true to life story shows Bundy as charismatic but also determined
to show that he wasn’t crazy as the press would have the world believe.  His defense to the horrendous things he’s
done is that anyone could be a killer.  That’s
the chilling point of story as we see Kirby’s Bundy be completely normal, likable,
and you find yourself, much like Wood’s FBI agent every few moments, forgetting
what he actually is. 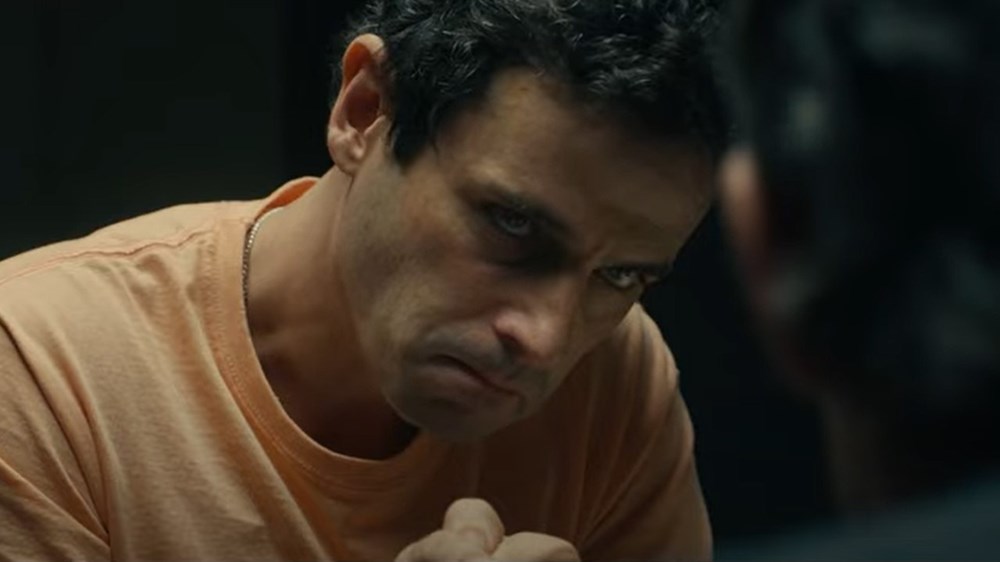 Kirby brings out the most dangerous part of Ted Bundy which
is his intelligence mixed with his ability to charm.  He was smart.  He knew the limits of the ones that would be
following him.  He off handedly describes
the fact that he wasn’t actually trying to change his appearance, that people
only saw what they wanted to see.

Elijah Wood is great here as Bill Hagmaier, showing not only
the fascinated side of the profiler who is given an opportunity to learn from one
of the monsters he hunts first hand to fighting the battle in his own mind of
if Bundy is right…and it would only take one thing to make him turn into that
very monster.  We also see the tragedy
that is Hagmaier’s relationship with Bundy, a man who calls him “his best friend.”  In real life the profiler spent up to 20
hours a day with Bundy.  When the serial
killer was executed Hagmaier believed he actually killed twice as many victims
as the original 30 he confessed to.

As said, the film has an almost play like quality but director
Amber Sealey does some amazing things with flashes of imagery such as decomposing
animals, skyscapes, to give us a peak into the psyches of both men.  But she also uses the camera and angles to
also make us feel and see aspects too.
Ted’s face for the first few minutes we see him is half hidden or only
partially in profile, perhaps to let us know he’s always going to hide who he
truly is.  Then there’s the rotation of
the camera, seemingly switching where the two men are seated, so you no longer
know who is the one in charge and asking the questions.  It’s a neat beat of filmmaking. 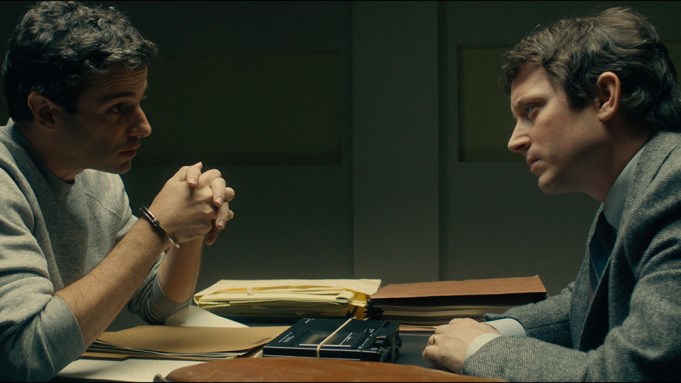 Hagmaier himself was an executive producer on the film.  Elijah Wood not only acts in the film but is
a producer as well.  No Man of God will
stay with you for a while as you find yourself debating on Bundy himself and
the simple fact…he chose to do these horrible crimes.  The fact he was very, very real and is more
terrifying than any monster dreamed up on screen.

I got the chance to speak with star Luke Kirby who plays Ted
Bundy.

HH:  You truly brought
Ted Bundy back to life. I don’t know if I should congratulate you on that but
it was truly amazing.

LK:  Well, thank
you.  I’m here to tell you that Ted Bundy
is actually dead.

HH:  I don’t know if I
believe you after seeing this movie.  My
first question is very standard though.
How did you get involved with this project?  There seems to be a major interest in Ted
Bundy lately, but you managed to do something I’ve not seen before with him which
is you really brought a humanity to him.

LK:  I was given the
script. I think it was maybe like February of 2020, if you can even remember
when that was and what that was like. Oh, my God. And I was aware of these
other projects. It's not entirely fair to even bring them into the
conversation, really, but I was certainly aware of it. And one can't help but
feel like there's a degree of there's got to be a limit to how much we can kind
of glean from this story.

And there's a kind of a cultural obsession that, to me,
sometimes strikes me is a little bit ghoulish or gruesome. And it's certainly
not like my wheelhouse, but, you know, there's no accounting for taste. So I
read the script and it read very well, had a kind of really sort of chamber
piece quality to it, anything that has that just two people in a room together,
just this back and forth, it really gives you that just sort of a simple
relationship to play.

And that was very compelling. But I did find the material
ugly because of the nature of not just his violence, but sort of this quality
of wanting to deny his responsibility, his actions, and this sort of desire to
make him the victim was disgusting to me.

But I met with Amber in mid March, our director, because I
happened to be in Los Angeles, and we met in a park because we just been told
that we had to all stay 6ft away from each other. And we talked and talked and
talked, and she sort of she kind of allowed me to sort of gripe and grumble
about everything that I found kind of repulsive and and unappealing about the
potential to kind of getting into the story.

And she really heard me out and I heard her side of things.
And we sort of the conversation became sort of more about qualities that we
haven't seen in these stories and bringing to life sort of a kind the voice of
the voiceless and the things that are sometimes have felt absent from these
stories. There was no desire to make this kind of to continue this sort of
mythology of a rock star that we had to sort of put a stake in that heart.

HH:  And one thing
that you did and I thought was interesting was there was always throughout the
interviews. And you're right, by the way, it felt like a play because of it
being the two of you talking back and forth. And it was just mesmerizing to
watch.

But you made him eerily likable, but you could tell there
was something off and you knew not to trust them. And that really, I think,
captured what you see in the real interviews.

LK:  Charm is really a
disarming feature.  And he knew how to
use it like a tool.

HH:  As part of his
arsenal.

LK:  And I think that
there are I think that people do that. And I think that it's more of a
blueprint of charmer, a facsimile of charm. It's rooted in something a little
sinister, which is sort of using it as a means to get out of responsibility.
But I see that feature in a lot of people out in the public, people in high
seats of power. And that was part of the kind of part of my desire to kind of
investigate it a little bit further.

HH:  So my last
question for you is…do you think Bundy wanted somebody to actually understand
him or was this some sort of ploy for the long game that didn’t actually work
out?

LK:  I really don't
know the answer to that. I mean, I do feel like everybody, even the most
monstrous of us, must have some degree of pain within us and a need for
connection. That's sort of how I you know, how I have to look at things. But I
really you know, I think he really like anybody didn't want to die at the hands
of the state like that. I mean, who would, but he snuffed out life and no, kind
of really almost to the end, just really denied his involvement in it or tried
to turn it into something where he thought he could be of service or value.  It’s a confounding personality.

HH:  How you played it
in the film, there's part of it that feels like he was trying to justify it.
Like, what did I do different than what anyone else has done? And that's the
more terrifying thing of all. He really made it very easy to believe anybody
could become what he was.

LK:  Everyone has
ugliness within themselves. And I think it's a good thing to, you know, be
aware of it and be aware of what is within us. And that is what we are capable
of and what is our potential. But to sort of try to manipulate others after
having committed so many crimes is really it's just a foul, foul trait. But,
you know, I don't know. I think of it as the interest of this era of, you know,
personality.

He was born as a kind of Boomer into a world where he was
sort of granted this mythology about all these movies about Westerns and the
rugged cowboy and the rugged individual. And this is still a sort of trope that
is being played out in high seats of power. And this idea of being you're out
there on your own and you're responsible for yourself, and you hike yourself up
from your bootstraps and all this stuff. And then as soon as these guys get
caught with their hand in the cookie jars, like, no, no, it's society's fault.

It's not me. There's this kind of ongoing trait, this
pathology that I think is bigger than just this one, man.

No Man Of God is out now in theaters and on streaming. 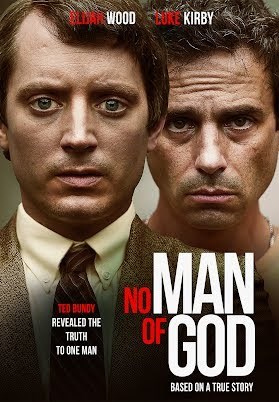