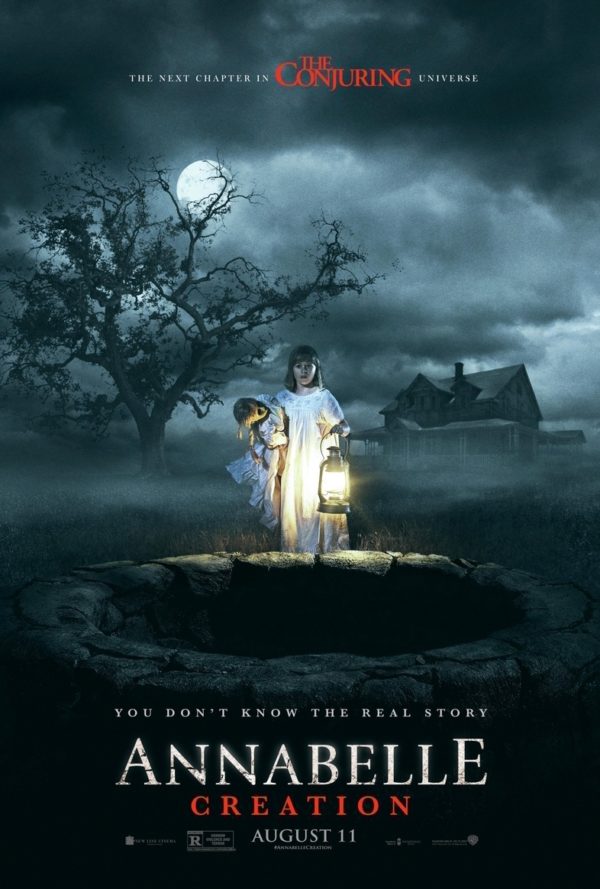 Last night, New Line Cinema previewed a special SDCC screening of Annabelle Creation for press and select lucky Comic-Con goers. The event itself was a delight – with a pre-show meet-n-greet (press only) with both the cast and crew of Annabelle - and the highly anticipated Stephen King's IT. Following, the cast appeared on stage to a packed theater to premiere not only this new installment in the Conjuring film franchise – but also premiere two new clips to IT – as well as an all-new trailer, followed by a cast and director Q&A. We will have more news on IT in the coming weeks – but needless to say, the clips reaffirm the idea that this could be the best horror film of the decade ...

An extra special surprise was a premiere trailer for The Nun – which comes out in one year's time. (This being the spin-off feature film based on the spooky Nun ghost featured in The Conjuring 2). Finally .... a screening of Annabelle Creation. To be fair – I should first state, that while I liked The Conjuring (I liked the Conjuring 2 a lot more), and thought the Annabelle spin-off was quaint, if unnecessary, I definitely went into this screening with hesitation. But I am glad I attended.

Annabelle Creation begins with a not-so original opening. Not that it's a rehash of prior films or a look-alike – but it just feels like we have been here and seen this. The vibe. The tone. The overall "This is a horror movie, so lets put our pieces on the playing board" set-up with characters. The grumpy (scary?) old man. The hidden wife. The kids (each with their own set of attitudes) ... orphans who have been invited to stay at a couple's home 12 years after the death of their daughter, Annabelle (spoiler?).

Once in the home - the kids are told to stay out of Annabelle's locked room. Of course, the spooky nonsense starts to happen - aimed more particularly at a cute young girl named Janice (Talitha Bateman) who is suffering from polio and slightly crippled. She sees things movie - shadows. Faces. Doors opening. And then - the doll. Things, you'd imagine, go the normal route of evil spirit attempts to take girl's soul (and you'd be right) – but here's where things get crazy. Director David Sandburg (Light's Out) has somehow taken this simple premise and turned it into one of the most truly frightening movies in years. Near the end of the film, I wanted to tap out. I couldn't take anymore. Every scare was wonderfully executed. Perfectly timed. And he allows the scares to happen on screen - build and unleash. No "jumps" or crazy camera jumps or unneeded "noises" to push scenes into intensity. Every scare works. And works. And works. And doesn't let up. At the end of the day, Annabelle Creation isn't very original (let's be completely honest here. The set-up, plot, and goal is common) .... but unlike every film that came before it, Annabelle Creation succeeds where it needs it most. It's 100% scary. On August 11th, I highly suggest fans of scary and spooky cinema – don't overlook this sequel of a spin-off. And if you're a fan of The Conjuring "universe" – including the original Annabelle – this film delivers some truly exciting connecting points and call-backs sure to please!