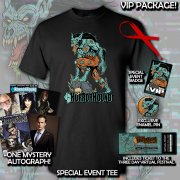 The Virtual HorrorHound Film Festival will kick off with a night filled with new feature films and shorts that would have made up the lineup of the intended HorrorHound Film Festival. Programming will last past midnight, and include many surprises, including introductions by filmmakers, filmmaker panels and special looks back at past HorrorHound Weekend events. While the livestream is occurring, fans can also participate in our chat feature, and talk with one another while the movies are streaming – chat sessions in which the filmmakers will be participating in as well. Plus, we will have a live Viewing Party option, where attendees can participate in live video chats during the films' livestreams.

On top of this, people who attend the Virtual Film Fest will have access to new HorrorHound merchandise – made available for the first time as part of this digital event. The festivities kick off Friday, September 18th, at 2pm – and will continue each night at the same time, through Sunday, September 20th. *Select convention merch: remaining stock may be offered later after the ‘Fest.

All you must do to access this three-day Virtual Film Festival is purchase a ticket. You will receive an email with a password code. When the event weekend comes, on live.horrorhound.com, you will be will prompted to enter said code. Once the code is entered – you are set. The livestream will begin. Please note – this is a LIVE streaming film festival, which means there is no "pause" functionality. So, make sure you have your popcorn ready!  Enjoy the film fest!

*Celebrity Autograph comes from the HorrorHound archives from hosting special guests for over 10 years in the convention world. Specific autographs can not guaranteed – you will receive one mystery autograph from dozens of possible celebrity names – all secured by HorrorHound at a past HHW event – guaranteed. You may even be one of the lucky ones and receive a premium autograph, such as a copy of HorrorHound Magazine signed by Mads Mikkelsen or Elvira(!) .... Possible celebrity autographs you may receive include Patrick Wilson, Joel Hodgson, Kane, Mads Mikkelsen, Elvira, the Soska Sisters, Fiona Dourif, Carla Gugino, Larry Drake, Tom Hopper, Pam Grier, Edward Herrmann, Malin Akerman, George A. Romero, Derek Mears, John Noble, Megan Ward, Robert Maillet, Joe Dante, and more!
Select a Style